EDIT: There is a tentative deal in progress but my point remains and it is still work thinking and reading about. It’s going to keep happening all over.

It’s been a frustrating and dark couple of years for most everyone you pass on the street. You can see it in the way people carry the existential burden. We have all been dealing with similar isolation, mandates, lack of leadership, uncertainty and the feeling this will never end. Some of us have lost loved ones to the virus or suicide. Oddly enough, at least in America, the collective suffering doesn’t seem to bring us together. It drove a wedge between neighbors. Empathy is lacking. And other folks out there had to take the same raw deal while making minimum wage, being patronized as “Heroes” then losing their “Hero Pay” in a blink of an eye but they still showed up and helped the masses since the early days of 2020. Those people are fed up. And I don’t blame them. I understand their plight and I fucking support them.

I started working at a grocery store in January 2020. I thought of the work as temporary and would move on from when the time was right , but ended up being a year and a half of my life. And for the first seven months of my time, days were defined by agitated customers projecting their insecurities and loss of control onto employees while half-wearing masks. They’d take out their frustrations on me and my coworkers behind plexiglass dividers after we got done wiping down the conveyor belt and cash registers for “their safety”. The protocols were silly and only heightened anxieties but we still did them.

Everything changed to make our job more difficult. All the charm of having conversation with people was gone. It was a brutal way to work day in and day out while the world couldn’t make up its mind. But nonetheless we persevered. And in a media landscape with such confused messaging from every one in power we thought we were putting our lives on the line and in some cases we were. We didn’t have a choice to go anywhere. We were stuck. There was a global hiring freeze along with shut downs of major parts of the economy that still happen to this day.

At the beginning of the pandemic the company gave us “hero pay” and unlimited overtime to incentivize us to stay on and to ease the suffering we were all going through. It was only a $2 bump but it helped me pay the bills. This went on for some months. Soon enough the overtime was gone (didn’t use it anyway because it was overtaxed and exhausting). Then came the time for the extra pay to go away. I don’t know if you have been given a pay raise for six months then it is taken away but that hurts the wallet and you realize your worth to them in that moment.  By the end of the year, that “hero mentality” and extra pay was gone. Striking wasn’t an option for us because it was non-union. But I can see the utility in it.

But I am not here to talk about the pros and cons of unions and/or about what they have to do with the situation with King Soopers. What I’d like us to meditate on is the people that showed up when shit hit the fan and the world shut down. Do you remember that the government was offering us very flexible unemployment benefits? Those people still went to work. You could make more staying home than working in a grocery store. It was maddening.  But they showed up. Maybe they listened to you and consoled you while your world was falling apart because you couldn’t find what you needed to feed your family. I know you remember the chaos and the fear. 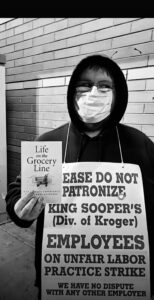 Now that I reside in the “pajama class” and work from home, I’ve had time to reflect back on that life. I still work in the grocery supply chain but I don’t have to be bathed in hot breath every day. I was lucky enough to find a job in a field I had previous experience while I promote the first book and write the second. Many people don’t have that option. 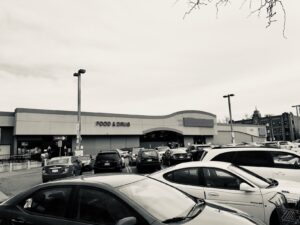 And that’s where the employees at King Soopers are left as they go on strike. I support them and I hope they get everything they want. They deserve it. One last consideration, as a general rule: these hard-working, Karen appeasing folks should be dignified with wages more suitable for people forced to deal with the public when a pandemic involving an airborne virus comes to town. Until robots run the world we need grocery store workers and I think it’s perfectly reasonable for a company to be more worker focused and reward people for two years of emotionally ravaged chaos and anxiety that made some even more rich and many others far behind.